A lot of planning goes into plein air painting, to maximize time and light at the right location in the right weather on the right day. Invariably something goes awry and the plan has to change. On a recent trip to Laguna Beach I made a plan to paint at a well-known spot near the Hotel Montage, where I should have enough time to work on two paintings that I had already started in that location on prior dates. The weather had other plans, with high winds churning the surf into an entirely different scene than what I had painted before, low tides messing with my compositions, and freezing cold temperatures making everything seem harder than it should have been.

Plan B. I meandered a bit and found a stunner of a view that for some reason I’d never seen before. I bundled myself up for the Arctic wind and set everything up, feeling great about capturing this beautiful scene. I thought it should be a relatively familiar affair, given that it had so many elements that I’ve painted so many times. The ocean is where I go when I want to feel like I can actually paint. I don’t struggle with it like I should. I don’t struggle with it like I do with everything else. It should only take a coupla hours and then I can go over to the other spot and maybe put some finishing touches on that other painting, if the afternoon tide and light are willing. 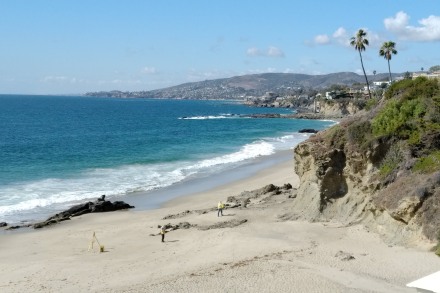 About an hour in I was struggling. Something wasn’t right. I was having a hard time with the most basic elements. I couldn’t even draw the scene accurately. I was being pestered endlessly by looky-loos wanting to know if I was painting, what I was painting, and if they could take my picture. Many of them just stood silently behind me for absurdly long periods of time, perhaps not realizing that it’s not performance art. Perhaps they also sit on their lawn and watch their gardener snip the roses?

My alarm was counting down the minutes until my parking meter ran out. Stupid Laguna Beach and their stupid 3 hour parking limit, and nobody was there to watch my stuff for the 10 minutes it would take me to feed the meter. My painting was awful, my fingers were purple, and I was at my limit for stupid comments. I packed everything up, fully intending to throw away the canvas. At the very least I was going to feed the meter and then work on my other painting for the last hour of decent light that I had left. I went to survey that scene and the weather still wasn’t agreeing with me so I contemplated how to maximize an hour of painting time while I huffed back to my car to feed the city more money.

After recharging my determination and the meter I headed back to the same spot. I’d only been gone about 10 minutes and it was already occupied so I planted myself right in the shrubbery nearby with the permission of a groundskeeper who was busy watching for whales, and set up for another hour as the circus side-show in the freezing wind. I did my best to ignore everyone, since I was sure to say something inappropriate, and I raced against the light to turn the painting around. The irony is that in the golden hour before sunset, the light gets better and better but it does so faster and faster until you can’t see anymore. I didn’t even have time to recharge my palette when I ran out of white in the final minutes, making every last stroke count with what I had left.

In the end, I came away with a painting with very good potential. A far cry from being worthy of the trash bin. 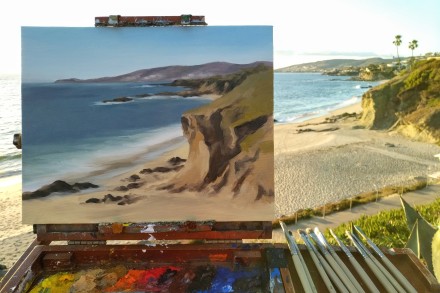